This listing is being maintained by its rightful owner.

The Best Barbecue in Frankfort, Kentucky

Open for indoor and outdoor dining as well as pickup.

But their signature dish is their Turkey Ribs, a unique, moist and flavorful blend of seasonings and turkey breast meat served on the bone, either smoked or breaded and deep-fried. 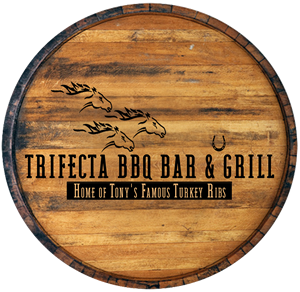 But Tony was home alone, and he got an idea. “I’ll clean the house and cook lunch,” he thought.

“Something smells good,” Mom said as she and Tony’s sister walked in the door. They all sat down and enjoyed an Easter meal of fried chicken, corn and – well, instant potatoes “that didn’t work out so well,” Tony says.

Tony has been cooking ever since.

After a stint in the United States Navy and several jobs – including one running a restaurant in Alton, Illinois, just across the Mississippi River from St. Louis – Tony ended up in Versailles working for QuadGraphics.

But the call to cook and own his own business was too strong. So, in April 2016 Tony quit his job, bought a grill, a cooler and a 10’ x 10’ popup picnic canopy and set up shop as “TNT BBQ” at a used car lot on Frankfort Street. Word got out after someone posted on Facebook, and the customers started coming. Tony later moved and set up his canopy at a local strip mall and more customers came.

As fall arrived and cold winter weather approached, Tony knew he needed to do something, so he started looking for a building. By October, he had found a spot and started remodeling with the help and generosity of Lee and Braden Adams of On-Call Maintenance, who voluntarily worked nights and weekends to remodel the restaurant that opened on Oct. 26, 2016 – just six months after starting in a tent – as Trifecta BBQ, Tony’s flagship restaurant.

Why “Trifecta?” That’s another story, but in brief, Tony knew a thing or two about gambling on horses and always bet the trifecta. He also knew Versailles is a horse-centered community. So the name was a natural choice.

So what makes Trifecta the best barbecue restaurant in Frankfort, Kentucky? It’s quite a recipe…

First, Tony is a people person. “I never met a stranger,” he says. “I make people feel at home from the minute they walk in. Everyone is greeted as soon as they set foot in the building, and we try to treat everyone like family.”

Third is high quality ingredients and technique, resulting in outstanding food. Tony and his team use only the best cuts of meat and the best seasonings, and the food is well-prepared. “Our pulled pork and brisket are dry-rubbed then smoked for 12 hours – “slow and low” – over a mix of hickory and cherry hardwoods, and always to the same exacting standards. Every time.

Which leads us to the fourth ingredient, consistency of product. “If someone comes in and they like a meal, we want it to be the same every time they come in – otherwise they won’t come back. We want them to know they can get tomorrow exactly what they got today – the same flavor, the same quality, the same everything.”

Trifecta BBQ offers catering and party services as well. Call us to plan your next event – at your location or ours!

The Best Barbeque in Frankfort, Kentucky!